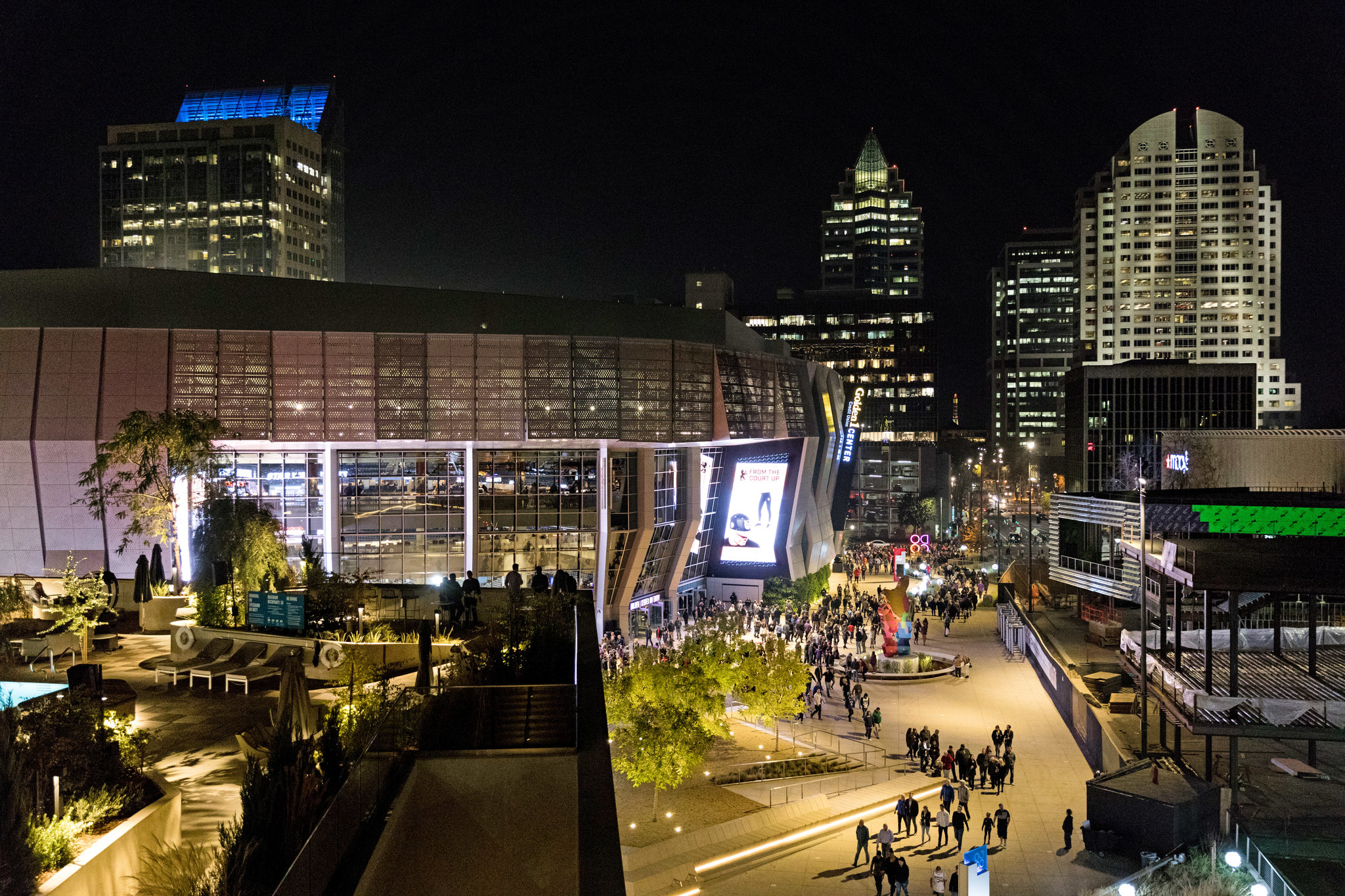 SACRAMENTO — Hours before the Sacramento Kings played their N.B.A. home opener in October, Vivek Ranadivé stood on the balcony of the team’s new fourth-floor office at the $1 billion Downtown Commons. He watched hoops fans stream into the year-old Golden 1 Center. He smiled at guests swimming in the rooftop pool of the brand new, 250-room Kimpton Sawyer Hotel. Below him, the open-air plaza at street level bustled with life.

“Four years ago, this place was dead,” said Mr. Ranadivé, referring to downtown Sacramento, the capital city of the most-populous state in the union. Like many cities, Sacramento’s urban core needed some serious rethinking. “You could have thrown a bowling ball,” he said, “and it wouldn’t have hit a soul.”

No longer. Three years after Mr. Ranadivé, the owner of the Kings, partnered with the city to scrape away a nearly empty downtown mall, and a year after he opened the arena and the 1-million-square-foot commons, Sacramento is a city reborn.

The number of downtown jobs has increased 38 percent, according to the Downtown Sacramento Partnership, a city economic development group. In the last year, 27 new stores have opened and 23 others are scheduled to open this year. So much construction is happening that the city has decided to hire two dozen new employees to process applications and building permits.

And Sacramento is not alone. Across the country, in more than a dozen cities, downtowns are being remade as developers abandon the suburbs to combine new sports arenas with mixed-used residential, retail and office space back in the city. The new projects are altering the financial formula for building stadiums and arenas by surrounding them not with mostly idle parking lots in suburban expanses, but with revenue-producing stores, offices and residences capable of servicing the public debt used to help build these venues.

In Columbus, Ohio, Nationwide Realty Investors has constructed the 75-acre, $1 billion Arena District, with an N.H.L. arena (home to the Blue Jackets), surrounded by 1,030 apartments, 2 million square feet of commercial space for 80 businesses, a minor-league baseball stadium, restaurants and stores. In Cincinnati, the Banks, a new $1 billion mixed-used district, has emerged on the Ohio River shoreline between the city’s baseball and football stadiums. In Inglewood, Calif., a $3.8 billion, 298-acre mixed-use development currently under construction will include a privately financed N.F.L. stadium to be shared by the Los Angeles Rams and the newly located Los Angeles Chargers.

And in Detroit, the $863-million, 19,500-seat Little Caesar’s Arena, home to both the Pistons and the Red Wings, opened last summer in amid the 50-block District Detroit, a $1.2 billion mixed-use neighborhood.

The explosion in mixed-use developments like these is owed, in part, to the urban American economic renaissance. City populations grew faster from 2010 to 2016 than those in the suburbs, reversing a 60-year trend that started in 1950, according to census data. And cities — not suburbs — are the now primary generators of the nation’s economic growth, according to research compiled by the Federal Reserve.

“It’s the one-square-mile effect,” said Bruce Katz, an urban development specialist at the Brookings Institution. “Downtowns and midtowns possess an enormous amount of value in a relatively small geography.”

For years, owners used their team’s popularity or perceived economic importance to strong-arm government officials. In many cases, owners threatened to move their teams if governments did not build them new stadiums along with the roads and public utilities needed to operate them.

A 2016 study by the Brookings Institution found that 45 stadiums and arenas for the four major professional sports — football, baseball, basketball, hockey — were constructed or renovated in the United States from 2000 to 2014 at a cost of nearly $28 billion. Of that, $13 billion was publicly financed with tax-exempt bonds.

But previous projects that foundered, particularly in the 1990s, point up the potential risk of these investments. “What was at work in those deals was the idea that a large public subsidy for a stand-alone facility would keep the team in place and would stimulate economic activity,” said Roger Noll, emeritus professor of economics at Stanford University. “The financial catastrophes that occurred convinced cities and residents that multimillion-dollar subsidies for stand-alone stadiums are a loser.”

Examples of that are legion, particularly for N.F.L. stadiums. In the early 1990s, St. Louis city and county, and the state of Missouri, spent $258 million to build a 70,000-seat domed stadium downtown to attract an NFL team. The city lured the Rams, who played in the stadium from 1995 to 2015 before moving back to Los Angeles. The city, county and state still have $140 million in debt, and millions more in annual maintenance costs to pay until the debt service is completed — on an empty stadium — at the end of 2021.

Urban design specialists also raised their voices in opposition to the old model. They noted that generous public-stadium financing ignored almost every facet of sound real estate development, like location. America was producing a generation of isolated arenas in the suburbs and countryside, ringed by giant parking lots, many of which sat empty much of the year. 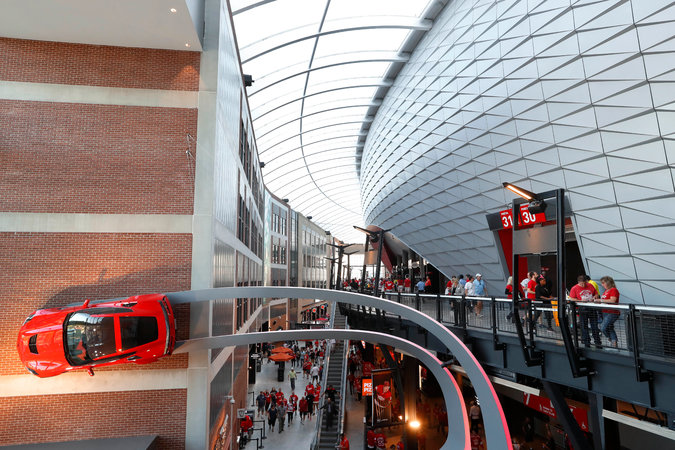 That certainly characterized Detroit’s comparatively brief experience with suburban sports stadiums. In 1975, the NFL Lions moved from the nine-acre, 63-year-old Tigers Stadium in Detroit’s Corktown neighborhood to the $55.7 million Silver Dome in Pontiac, which was surrounded by over 100 acres of surface parking near the center of the struggling Oakland County city. The team stayed until 2002, when it returned to Ford Field, a $500 million stadium alongside the two-year-old $300 million Comerica Park, the baseball Tiger’s new home on Woodward Avenue in downtown Detroit. Both stadiums were partially financed with taxpayer dollars.

Last year, Little Caesars Arena opened across the avenue, completing a strategic development vision, developed by business and civic leaders in the 1990s, that focused on professional sports as a catalyst for Detroit’s revival. The NBA Pistons play in the new arena after spending the previous 29 seasons in The Palace of Auburn Hills, a 22,000-seat arena in a prosperous suburb 33 miles north of downtown Detroit that opened in 1988.

The Palace held its last event in September and is scheduled for demolition. Its 109-acre site, most of it surface parking, is being rezoned as a campus for high tech business and research.

A Role Model in Kansas City

If there is particularly good model for what’s happening in Sacramento, it can probably be found in Kansas City and the city’s Power and Light District. The $1 billion, 12-block district features a 150,000-square-foot covered plaza, more than 50 restaurants and taverns and hundreds of market-rate apartments. It opened in 2007 next to the city’s publicly financed $263 million, 18,500-seat Sprint Center, which, though it does not host a professional team, has been frequently used as a site for college basketball games, including regional rounds of the annual NCAA tournament.

A decade later, the Power and Light District, developed by the Cordish Companies — whose chief executive, David Cordish, is credited with being a leader in sports-focused mixed-use development — is cited by city officials as the primary reason that a 2.5-mile, $102 million downtown streetcar line in the city center started in 2016. Thousands of new apartments opened, the downtown population increased to 30,000 from 8,000, and city tax revenue soared.

If there’s one well-known distinction separating Millennials from previous generations, it’s that they don’t live to work – they work to live. Priorities have shifted, so at the end of the day, it might not be the paycheck that matters most but rather the culture and a better work-life balance that keeps them loyal to a company. As more Millennials and Gen Z enter the workforce, the offices of the past are evolving into a more relaxed, open-minded, and hands-on environment that better suits the personality of newer generations. They’re driving office design trends that are bringing the workplace fully into the 21st century.

1. THEY’RE KNOCKING DOWN THE WALLS

Millennials prefer a collaborative, social environment, so the days of cubicles are over… long over. In its place has arrived the open floor plan concept. No more walls. No more dividers. No more disconnect betw

een employees. Simply a group of desks grouped together. An open floor plan encourages communication, building strong team connections and fostering camaraderie between employees. And the best part about this from a business perspective? Frequent interactions and collaborations can lead to innovative ideas and developments that benefit the company in its entirety.

Beige walls. Beige carpet. Beige desks – a.k.a. boring, boring, and boring. Modern, comfortable, eclectic – those sound better, don’t they? Yes? Then let’s kick the drab shades to the curb and breathe life into the space where people spend more than eight hours a day. Influenced by Millennials’ desire for an appealing workspace, offices are getting a makeover from floor to ceiling. It’s time for businesses to decorate with pizazz whether they’re drawing influence from the company’s values or inspiration from employees’ personalities. When your office is a medley of vibrant and engaging hues, it increases employee productiveness, so a splash of color really can make all the difference.

3. THEY’RE REPLACING THE OLD TECH WITH THE NEW

Born into the new era of technology between 1977 and ’95, Millennials are the definition of “tech savvy,” so they’re expecting a technologically up-to-date office space. Gone are the clunky desktops and miles of wires commandeering desk space, and in its place are sleek laptops and tablets. These devices can be easily transported from one side of the office to the other (Can you do that with a PC? I think not.), and all the information an employee needs is always right at their fingertips. Using the latest technology also streamlines and automates what were once time-consuming tasks, allowing employees to be more efficient and productive!

4. THEY’RE CREATING A VARIETY OF SPACES

Variety is the spice of life, and Millennials agree – especially in the workplace. Creating a variety of work spaces inspires a more engaging environment. Consider a large conference space with modern tables and chairs for important meetings. A collaborative room with a standup table and monitors for internal discussions. A small, sunlit area with large windows and a cozy couch for an employee seeking peace and quiet. When presented with numerous rooms and areas, employees can find the space that helps them be the most productive for the task at hand.

The last and certainly the most important office space trend influenced by Millennials is quite simple: make the workplace fun! Remember, Millennials place a lot of emphasis on a company’s culture – will they be expected to work around the clock, or does the company believe in a work/play balance? Whether you put a pool table in the lunch room, place a ping pong table in a spare room, or hang up a hammock in a quiet room, providing engaging activities around the office will help your employees rest and reset their busy brains. After their break is over, they’ll feel mentally refreshed and ready to tackle what the rest of the day has to offer. Who says you can’t live a little at work?

This truck is moving your neighbor, why not you?

According to the USPS; 55,000 change of address forms are processed every day in the United States. Every summer tens of thousands of families physically move their residence.

Take some time before you hire a professional mover. Find a moving partner that will LISTEN and BUILD a successful moving plan that fits the budget and the schedule.

MOVING TIP OF THE MONTH:

If you’re moving locally, under 25 miles use the following as a guideline. 79% of all claims are caused by RUSHED MOVERS. Hire fewer movers for longer periods of time. You won’t regret it!

Chipman Relocations and Logistics is the largest family owned mover on the west coast.