As Don Henley would say, ” I feel it in the air, the summer’s out of reach Empty lake, empty streets, the sun goes down alone.”

Moving companies across the nation are starting to wrap up another busy summer. The summer of 2013 will prove to be one of the best and challenging in memory. So why was THIS summer so different?  3 main reasons:

1) Home sellers are making a few bucks at closing so they’re investing in professional movers.

2) Corporate relocation is booming again as companies scramble to hire the best of best. Human Resource departments are beefing up offers which include perks like relocation services.

3) The US government, (DOD, GSA) continues to relocate thousands of families during the summer months.

In addition to the strong volume in 2013, movers had to deal with new regulatory issues form the DOT and FMCSA. The NEW rules include On Board Electronic Recorders and new HOS laws that limit the hours a driver can work and drive.

There is no debate that the new regulations will make the industry safer. However it will take a few summers to get used to the new normal.

The Hours of Service of Drivers Final Rule [Download PDF Version] was published in the Federal Register on December 27, 2011. The effective date of the Final Rule was February 27, 2012, and the compliance date of remaining  provisions was July 1, 2013.

SO…..as the dust settles on another moving peak season movers around the globe will say THANK YOU to all the customers, service providers and vendors that made 2013 one of the best in years.

In some instances, you may be requested to relocate in order to serve your employer better. While this may come at an inconvenient time and can be an overwhelming experience, there are many positive benefits to moving to a new state for work. Typically, it is in the best interest of the company to assist you in the process, as any additional expenses or unexpected fees may sway your opinion about continuing to work for the organization. The most important part of any relocation package is to make sure you are involved in the process of hiring a moving company.

Professional corporate relocation services help make sure the transition is seamless and allows you to focus your efforts on tying up loose ends before you make your move to a new town, community or state. In addition to having your moving fees waived, you may be able to garner further assistance such as paying for child care until you find a new nanny, a higher cost-of-living subsidy, a higher mortgage cost allowance or help with schooling for your children if your new town’s public education system is lacking, reports Monster.com.

When considering a relocation, make sure you are prepared for your move. If you’ve been given the opportunity to hire your own moving and storage company, you’d be wise to work with Stevens Worldwide Van Lines. Their team of professional relocation movers can help make your experience an enjoyable one. They’ll help plan the logistics of your move and assist you in organizing your belongings in a manner that makes unpacking as efficient as it can be. You’ll feel confident that your possessions will be in good hands and that your relocation has been well planned, which will give you more time to designate to finding the proper services for your family in your new community.

Being relocated by your employer may be a great experience. You’ll have the opportunity to explore new regions of the country, and most of the costs might even be paid for by your company. While it may be hard to leave where you’ve begun your career and family, new adventures await wherever you go. Stevens can help you, your family and your possessions get there in one piece.

Facilities professionals have a lot of great training opportunities available to us. In 2012, I decided to pursue IFMA’s Sustainability Facility Professional (SFP) certification. To do that I enrolled in a class that was offered in our area and taught by our esteemed instructor, Larry Morgan. This curriculum and class are the best, most valuable training available for the facilities professional. Everyone who is serious about facilities management as a profession needs to take this class and earn this credential.

What is the Sustainability Facility Professional (SFP)?

First, what exactly is an SFP? It is a fairly new credential offered by IFMA that goes beyond certifying a building design. It provides facility professionals with the tools that allow us to develop and implement plans that improve the facility’s impact on the environment and its occupants—not just today, but into the future. When you become an SFP, you gain a…

Stevens supports the organization through multi-faceted avenues including: 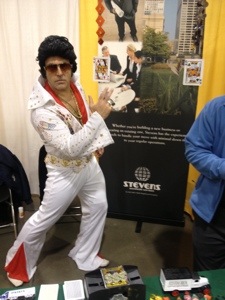 At the IREM conference in Detroit