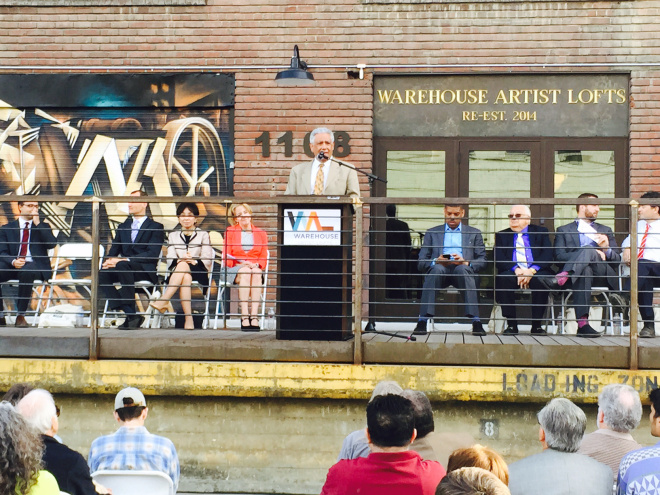 On behalf of the state, DGS Acting Director Esteban Almanza (at podium) congratulated the city of Sacramento, Capitol Area Development Authority and CFY Developers on the grand of opening of the R Street Warehouse Artist Lofts in Sacramento.

The State of California, through the Department of General Services, is a member of the CADA Joint Powers Authority, along with the city of Sacramento. DGS has partnered with CADA for the past 35 years and it affords us the opportunity to give back to the Sacramento community. CADA continues to build housing to meet needs for individuals at a variety of income levels, many of whom are state employees. In fact, the Capitol Area Plan, originally created under Governor Edmund G. Brown Jr. in 1978, speaks to the need to provide housing for the full spectrum of household types — families, singles, the elderly, the workforce and empty nesters.

If you are planning to sell your home, there are a few important things you need to be aware of. By doing your homework, you can get a good price for your home and find a buyer quickly enough. Even though the peak season for home buying is over, you can still take steps to ensure that your home will be sold fast. The key is in making a great first impression, especially for the highly competitive Roseville CA real estate.

First of all you need to set the right price. A common mistake that Roseville California real estate sellers make is that they ask for a very high price and lower it later when they aren’t able to find interested buyers. Remember that the first 30 days you put your house up for sale is the most crucial and it is during this time… 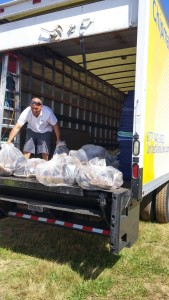 Chipman Relocations Sacramento donated a 26′ straight truck and a team of 4 people to help MaxCure collect over 500 pairs of shoes. The money raised at the event is used for Pediatric Cancer Research. Learn more about Maxcure at http://www.maxcurefoundation.org.   END_OF_DOCUMENT_TOKEN_TO_BE_REPLACED

Ah, the elusive millennial generation cohort. Employers spend millions of dollars researching millennial goals and beliefs to try and figure out what they want in a job. The housing industry can’t decide why they’re not buying houses like their parents did. (No savings for down payments? Student debt? They just prefer to rent?)

With millennial choices holding such a large sway over the economy, it’s not surprising that hotel chains have joined the rush of industries trying to crack the code and appeal to the cohort roughly defined as anyone born between the early 1980s and the early 2000s.

The latest lodging company racing to retool their portfolios to target the millennial and millennial-minded traveler is Hyatt Hotels Corp. (NYSE: H), which this week rolled out its Hyatt Centric brand. Hyatt joins a growing group of lodging companies making major changes to their hotel properties and services in hopes of capturing a bigger share of the millennial market, a customer segment that already accounts for around one-third of all business travel expenses, according to Hyatt.

This summer, the chain plans to unveil more than 15 Hyatt Centric locations, which will include already open and previously announced hotels in New York, Paris, Atlanta, Chicago and Miami, among others. Hyatt said its new brand targets “a multigenerational group comprised of travelers who view their hotel as more than a place to stay.”

“From listening to our guests, we learned there was an opportunity to better meet the needs of a large group of travelers that we call ‘modern explorers,” said Hyatt President and CEO Mark Hoplamazian. “These travelers are looking for a cosmopolitan vibe in the center of the action, so we worked to test various elements in real time, in real hotels over the past two years. Hyatt Centric is the culmination of that work.”

Hyatt’s new Centric line follows last week’s announcement of a new joint venture between Rockbridge and TPG Hospitality to develop and operate a Marriott International-flagged property in California’s Silicon Valley slated to open in 2016 targeting the same cohort. Growth plans for the AC Hotels By Marriott brand include more than 50 hotels to open within the next three years throughout the U.S. and Latin America.

Whether millennial or multigenerational, the Generation Y segment has made a strong impact on hotel design and branding over the last year, with Radisson, Marriott, Hilton, Loews, Montage and even Best Western having already unveiled brands aimed at millennials,

The new hotel brands launched by the major chains include Canopy by Hilton, Radisson Red, The Pendry, from Montage Hotels; The Vib (pronounced “vibe”) from Best Western; and OE Collection from Loews Hotels, and Marriott’s Edition boutique brand, a collaboration with famed hotelier Ian Schrager. In addition to the Marriott and Hyatt offerings, brands expected to see a big roll out in 2015 include Marriott’s new Moxy Hotels, Virgin Hotels and Tommie Hotels.

The AC Hotels brand has been around since many millennials became adults. Founded by Spanish hotelier Antonio Catalán in 1998, the chain gained a foothold in Europe and changed its name to AC Hotels By Marriott in 2011. Marriott International in mid-2013 announced it would roll out AC Hotels in North America as its first select-service introduced in the U.S. in 15 years.

Whether or not they are identified as targeting millennials in brand marketing descriptions, these new offerings are targeting cost-conscious and experience-focused younger travelers in their 20s and 30s, accustomed to staying at hostels, boutique inns and rooms booked through Airbnb and other social media.

The new hotel concepts are distinguished by smaller room sizes, many under 200 square feet, compared with the industry’s standard room size of 250 to 300 square feet, as well as spare design such as minimally adorned concrete floors, exposed columns and other structural elements, and modern “industrial-chic” furniture.

AC Hotels and other concept brands first emerged in the innovation-minded and fragmented lodging markets of Europe and Asia and have crossed the ocean to become new concepts for U.S. investors hoping to capitalize on the trend while increasing their returns, according to Howard Roth, global real estate leader for EY, and Michael Fishbin, the firm’s global hospitality and leisure leader.

The new products and concepts often emphasize lobbies and common areas, lounges and bars as focal points, creating more revenue-generating areas of the hotel outside of the rooms, with designs focused on attracting local demand, according to EY’s 2015 Global Hospitality Insights.

Low-cost hostel/lifestyle/budget concepts are now becoming available in both major markets such as New York, Los Angeles and Miami, where traditional hotel rates are prohibitively expensive, as well as in secondary markets such as Detroit, New Orleans, Nashville and Portland, where unique cultural elements can serve as a huge draw for millennials.

“Millennials demand instant gratification, including speed, efficiency and convenience,” Roth and Fishbin both said. “It trumps the importance of face-to-face contact or friendly service.”

In fact, mobile device applications such as TripAdvisor and Yelp make it more likely travelers will book their rooms at the last minute and post their experiences and complaints online, putting hotels are under the gun more than ever to deliver their best service.

“Their expectations are simple, but their standards are high and they want their experience to be intuitive and smart,” Rose said. “They want options and all the must-haves from a full-service hotel but without any fuss or complications.”