For a month, he learned how to coax a big rig along seaside cliffs and leafy back roads on the routes to many of America’s most idyllic golf destinations. Typically, he pulls up to the driving range. Then a 42-foot trailer becomes a mobile equipment factory, and for three manic days, he and nine other Titleist technicians cut, bend, hammer, and grind clubs to any taut specification a player might desire.

This became Bezuk’s strange life on the PGA Tour.

“It takes a certain type of person to be able to drive a truck and fix a club,” Bezuk said. “But we get to go to some really nice places.”

As the golf season winds down with the four-tournament FedEx Cup, beginning with the Barclays tournament, which ends Sunday, here at Bethpage Black, another long year will culminate for the players. It also means the end of a commensurately taxing grind for the support crews that trail the pros at every turn.

And the biggest among them are 72,000-pound semitrailers, like the ones commissioned by Titleist, TaylorMade, Callaway and nearly a dozen other golf brands, ubiquitously looming in the background for all the tinkerers on tour. Most fans never see them; they usually arrive on Sunday and depart Wednesday afternoon, headed toward the next tournament destination. In between, there is about 45,000 miles of driving per season.

Wade Liles, who has handled TaylorMade’s tour truck since 2000, learned to drive it in the company’s parking lot after the company hired him to replace grips on clubs. 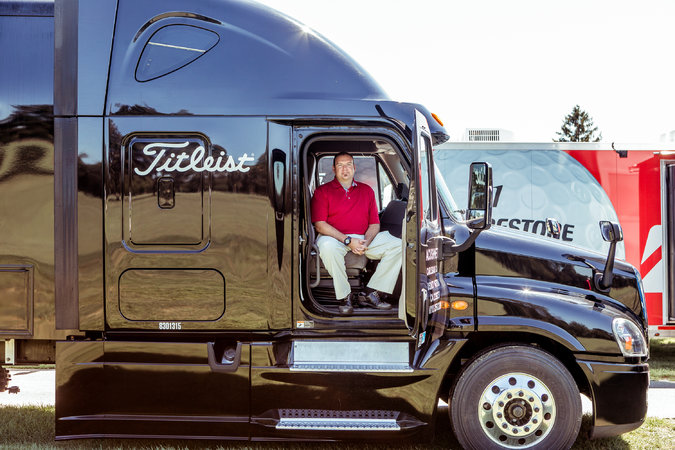 Over the last 7 years, YOU have rescued and delivered over 7 MILLION POUNDSof food – that’s enough to provide over 6 million meals to families in the communities you serve. As we celebr…

With ambitions of self-driving cars, Uber is headed to Motor City. On Monday, Sherif Marakby, the ride-hailing company’s vice president of global vehicle programs, announced that Uber will be openi…

With ambitions of self-driving cars, Uber is headed to Motor City. On Monday, Sherif Marakby, the ride-hailing company’s vice president of global vehicle programs, announced that Uber will be opening a facility in the Detroit area “in the coming months,” according to the Detroit News. The company hopes a presence in Detroit will help it…

Over the last 7 years, YOU have rescued and delivered over 7 MILLION POUNDSof food – that’s enough to provide over 6 million meals to families in the communities you serve. As we celebrated these milestones, we knew we needed to find a way to express our gratitude for the contributions your team has made to help us get there.

We are very excited to announce the launch of our Move For Hunger Milestones awards program. When your crew reaches one of our 10 award levels, which  range from 500 to 1,000,000 meals delivered, we will provide you with an image that highlights your accomplishment and can be shared via social media and/or featured on your website.

In the coming weeks, a Move For Hunger team member will be e-mailing our inaugural batch of winners. After that, keep an eye out for monthly updates acknowledging the latest milestones.

I have never been a gym person. However, that has never stopped me from signing up for gym memberships or buying new gym gear with matching trainers! With great gusto, I will show up on Day 1 and work my heart out, only to buy a packet of Doritos on the way back and forget […]

SACRAMENTO — Sacramento Police Department Chief Sam Somers Jr. announced his retirement Tuesday afternoon. Somers said, after talks with his family, he’s decided to make his last day Dec. 9 after being a part of the police department for 32 years. “Over the course of my career, I have been truly blessed to have had…

If you are moving to Irvine CA, or you have in the last five years, you are certainly not alone. Between 2010 and 2015, Irvine’s population increased over 21%, giving the Orange County city the highest percentage increase in resident population among all California cities during that five-year period. Irvine also ranked 7th in the nation. The ranking was based on recently released census data for cities with a population of 50,000 or more by 2010.

Only 10 other California cities were among the country’s top 100 ranked, including Lake Elsinore with a 17.3% estimated population increase and Milpitas with a 16.1% increase.

In addition to the five-year ranking, Milpitas, a city in Santa Clara County, also ranked #8 among the nation’s fastest growing cities (with a population of 50,000 or more) between July 1, 2014, and July 1, 2015. Dublin in Alameda County ranked 6th.

Dublin and Milpitas were the only two California cities making the U.S. Census Bureau’s list of 15 fastest growing cities, 2014-2015, but three cities – Los Angeles, San Diego and San Francisco – ranked among the nation’s top 15 with the largest numeric increases:

Irvine’s Continued Growth not a Surprise

Year after year we see reports of Irvine’s increase in population. A 2012 article in the Orange County Business Journal says “Irvine won’t max out for decades.”

At that time, city officials projected Irvine’s population would grow to 256,300 by 2020. However, the California Department of Finance’s recently released New State Population Report shows Irvine’s population had already reached an estimated 258,386 by January 2016.

Why are People Moving to Irvine CA?

Through the years, the city of Irvine has consistently ranked as one of the Best Places to Live, including by Livability. Some people say they move to Irvine for the city’s highly rated schools and its cultural diversity. Irvine is recognized as an international crossroads city, and education is a priority for its residents. More than 90 percent of high school graduates attend college, with students performing well above state and national comparisons.

Many people move to Irvine because, according to a report on The Safest Cities in California in 2016, it is one of the state’s largest safe cities. For more than a decade Irvine held its status as one of the safest cities in the country based on FBI violent crime statistics.

For various reasons, a growing number of people are moving to Irvine. That growth is not expected to slow anytime soon.

Moving a research lab can involve relocating heavy equipment, but the equipment is not always as interesting as the large system with blast tank moved for UC, Davis.

“The compression tank system and the experiments they do with the system is very cool,” says Linda Martin, Chipman National Move Coordinator. “They shoot projectiles into ice in the compression tank up to 6,000 miles per hour to determine the effect of how hard objects can hit planets or other things in outer space.”

Why ice? Ice is commonly found in the solar system. By recreating and studying the giant collisions of celestial objects, researchers can not only explain what happens in natural collision events, but also better understand the history and evolution of the solar system. You can  read more about the lab here .

Meeting the Challenges of Moving a Research Lab for UC Davis

The compression tank system was located in a basement. The only way to move the large pieces of the system was to open a hatch at ground level to a chute going up from the basement to the outside of the building. Chipman’s lab moversused a crane to hoist the compression tank out of the basement. An indoor crane was used to remove the wind tunnel motor from its frame to be moved.

The two largest tanks were transported to California on a flatbed trailer.

“When the shipment arrives in Davis, we will have a crane on-site to lift the tanks from the flatbed truck, have wheels put underneath the tanks and take them into the new building,” said Martin.

The remainder of the system and lab goods were transported in one of Chipman’s special commodities moving vans.  Moving a research laboratory can include moving freezers, refrigerators, chemicals and reagents in a specialized moving van equipped with generators and climate controlled to keep the appliances running and at temperature during transit.

The trucks are fully equipped with a monitoring system. The drivers have the ability to monitor the temperature of each appliance as they are driving from one location to another. Drivers are trained to check LN2 levels in LN2 vessels and LN2 freezers. They are fully prepared to replenish the LN2 during transit, when needed.

If you are planning an upcoming project and want first-rate, reliable laboratory relocation services, Chipman Relocation & Logistics is your source. Contact us to discuss your project.

DETROIT (CBS Detroit) – Step away from the Netflix! Metro Detroit has a long history of closing out the summer in style. With that in mind, here are just a few of the headlining events that the area has to offer this Labor Day weekend. Arts, Beats & Eats Now in its 19th year, Arts, Beats & Eats…